We wake to hear rain on the tin roof of our cabin. It has stopped by the time we get up. Phoebe, George and Max's shoes are very muddy as they go for one last visit to see the sheep, goats and llama. We pack the car and leave Bayfield for Durango. 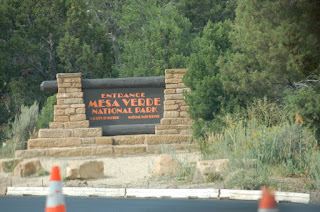 As the weather forecast is cloud, rain and thunderstorms we decide to change our plans for the day. Instead of mountain biking we will visit Mesa Verde National Park, just west of Durango. Mesa Verde contains the remains of homes and cliff dwellings of the Ancient Puebloans. 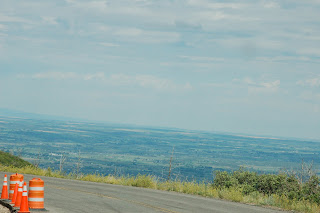 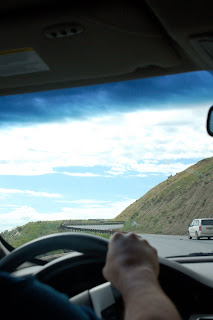 In the distance we can see the Mesa of Mesa Verde, a stark cliff face like a jutting chin. After driving along a fairly flat valley, we entered Mesa Verde National Park and began a 12 mile winding ascent to the top of the Mesa. The views as the road climbs are fantastic. We can see far into the distance. It's like the view from an airplane window.  Our first stop is the visitor's centre to buy tickets. It is windy and quite cool at the visitor's centre. The wind whips up the valley to the Mesa top where we are waiting in line to buy tickets. Tickets are required for viewing the cliff dwellings with a park ranger as a guide. We choose to visit Long House. This is the most remote cliff dwelling. The tour begins at mid-day. As it was already 11:15 we hurry as we have a 40 minute drive across the Mesa top to our destination. 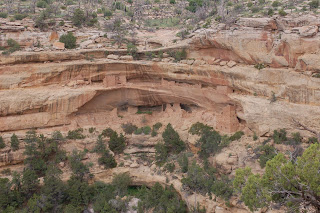 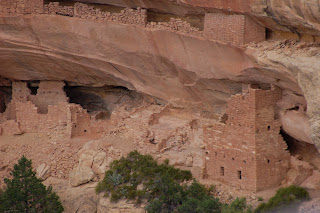 Our group is small, around 20 people instead of the normal 50 people. The cliff dwellings are beneath the Mesa top, over the cliff edge, built in a natural ampitheatre in the sandstone. Although our walk down the cliff is on a paved path with steps to the cliff dwellings, the ancient cliff dwellers scrambled up and down the cliff using toe and hand holds. The drop to the valley bottom is long, down sheer cliffs. It is frightening to think how these people made such a climb. 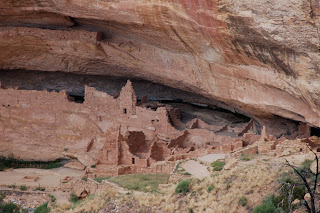 Built in 1200AD, the remains of the houses in the cliffs that we walk around were the choice of around 100 people. Women, men and children lived in this strange ampitheatre instead of living on the Mesa top. Our ranger points out that during this time, in contrast to the primitive lifestyle we see, Notre Dame was being built in Europe. 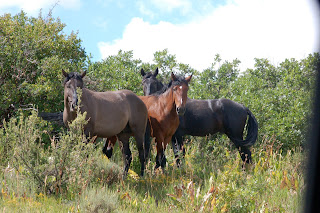 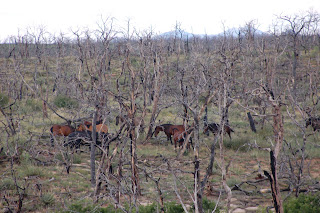 After our tour, we decide to explore other dwellings on the Mesa top before heading back to the car. A tram car takes us and a few other people back to the car park. On the way we see wild horses, but no mountain lions that also live in this area.
By now it is mid afternoon. The weather has improved and it is hot and sunny. We drive to the other more popular cliff dwelling but by now we are tired and decide to cut short our visit, only visiting the museum. It is hot and busy and driving on the winding roads is nauseous. 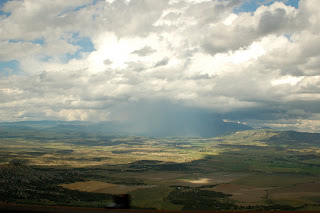 Driving back to Durango we see black clouds. Lightening flashes ahead of us and as we draw nearer to Durango, and the hills surrounding the town, we see a thin covering of snow that has just fallen during the storm. We run into our hotel just as it begins to pour with rain. Suddenly the windows are rattling as rain turns to hail. As we go to find a restaurant for dinner, piles of hail stones litter the pavements. Tourists and locals in flip flops and shorts slap their way along the street.
Posted by britt at 10:00 PM