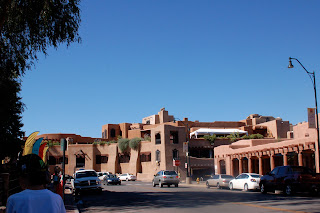 The day starts early. We are awake around 5:30am, which is 7:30am eastern time. After lazing in our hotel room for a while we begin the morning by using the hotel pool and hot tub which is open for use at 7am. These are located in an open air courtyard at the centre of the hotel. It is quiet. The majority of hotel guests are still in their beds. A couple of children watch us enviously from the balcony of their room. We hear them asking their parents if they can go to the pool. The answer is "not now". The water in the hot tub feels very hot but it is refreshing. The sun is just beginning to rise over the top of the hotel building and shine into the courtyard. The sky is deep blue against the rust-coloured walls of the hotel. 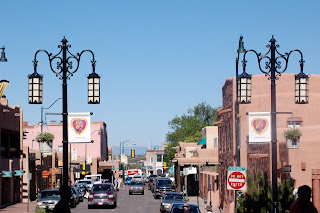 We head into the historic district of Santa Fe, just a short distance from our hotel. At the centre of this district is the Plaza approached by roads from each corner. As it is early there are only a few people around - those getting coffee and take-out breakfast before work, a few tourists and others who are just sitting in the Plaza. Grass areas with trees, hanging baskets of flowers, paths and benches make up the Plaza. Most of the benches are wet. This is not from overnight rain but from a man with a hose watering the hanging baskets that are directly above the benches. We spend a little time sitting on a stone wall in the centre of the square eating a breakfast of french pastries and baguette bought from a cafe just off the Plaza. The sun's rays are already powerful and hot. We move trying to find shade. 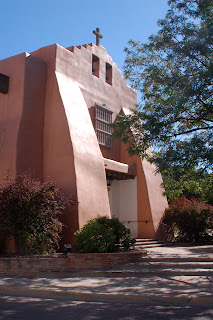 It's not the most exciting way to start a vacation but we decide to do a walking tour of the northern historic district of Santa Fe, using a Frommer's guide, and view the architecture. We keep to the tour, more of less. Most of the buildings are adobe with only one or two stories and rust brown in colour. They look like sand castles. The thick adobe walls are plastered so the surface is smooth and the edges and corners of the buildings are curved instead of pointed. They contrast beautifully with the deep blue sky. Many of the shops are art galleries selling paintings, sculptures and other artwork. 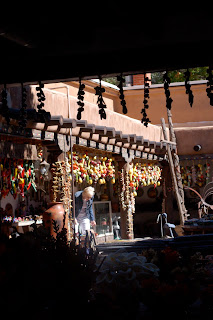 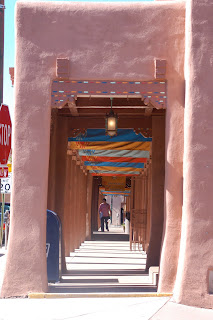 On our stroll we browse the wares of street artisans - Pueblo Indians - selling jewellery. They are set up in a row in the shadow of the portico, or porch, of the seventeenth-century Palace of the Governors, the ancient El Palacio Real, building. The jewellery is set out by each artisan on a square cloth or rug, each rug touching the next so we move quickly from seller to seller as we walk along. The sellers sit behind their rugs, next to each other, sitting on chairs or crates. They point to and pick up their wares to show us using a long stick. Phoebe buys a necklace made out of corn coloured blue from an old man with a very lined face. It is for a friend's birthday but she is quite keen to keep the necklace for herself. 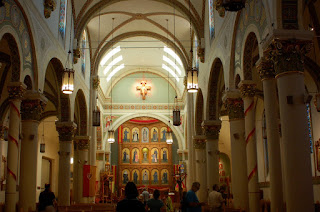 We walk to see the Cathedral Basilica of St. Francis of Assisi off the Plaza enjoying the coolness of the interior. By now the historic town is becoming busy with tourists. We go back to our hotel, pick up some food for lunch and drive to Los Alamos, about an hour and a half from Santa Fe. 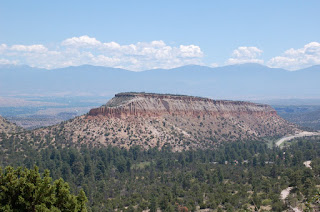 As we get closer to Los Alamos, the scenery becomes very dramatic. Gorges cut through the sedimentary rock and display layers of brown and red crumbling rock. The road climbs from the bottom of the gorge to the top of the plateau. We stop for lunch at a pull-out area off the road and admire the view as we eat sandwiches made from sliced bread, ham and cheese purchased in a Santa Fe supermarket. 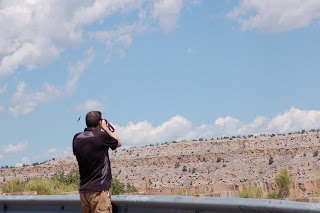 We have come to Los Alamos to visit the Bradbury Museum. In 1943 the town of Los Alamos was created as a community, not known to anyone outside, of scientists from the USA, Britain and other countries, their spouses and other support staff. The average age of the community was 25. The purpose of this community was to build the atomic bombs that were dropped on Hiroshoma and Nagasaki. The museum gives insight into lives of particular people who came to live in Los Alamos - personal details of their life while there. Models of the two bombs - Little Boy and Fat Man, named after Winston Churchill, are part of the museum. It is a fascinating but sobering visit. 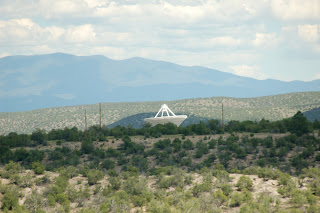 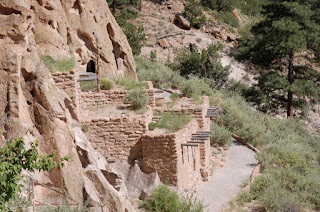 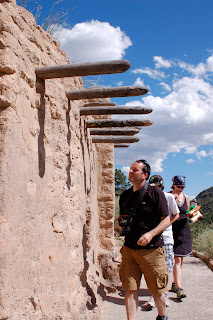 On our way back to Santa Fe we stop at Bandelier National Monument. By now, the middle of the afternoon, it is very hot. We walk on a trail to see some dwellings created by the Ancient Pueblo people in the valley and on the rock face of the canyon. The rock is made from volcanic ash called tuff. It is soft and holes can be seen in the rock. We climb wooden ladders leaning against the canyon wall to peer into the cave-like holes. George and Max enjoy climbing into these caves. Some of the ceilings and walls show evidence of soot from ancient fires. Although the trail in only a little over a mile, it is hard work walking in the sunshine that seems to bake the rock face and ourselves, and at altitude to which we have not yet become accustomed. 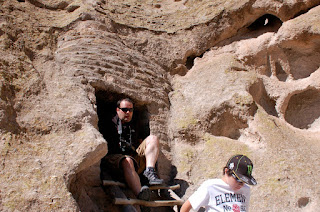 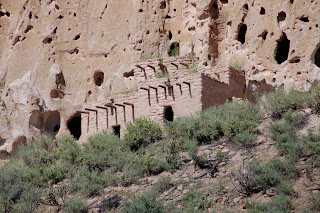 We see long strings of red chiles hanging everywhere so we decide to taste Mexican food for our evening meal. It is easy to find the restaurant mentioned in out guide book and not far from our hotel. The restaurant is busy. We experience our first taste of frybread drizzled with honey. Frybread is a deep fried tortilla that looks puffy. Without the honey it is quite plain tasting but with the honey it is delicious. 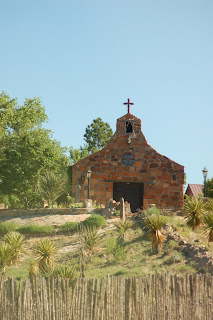